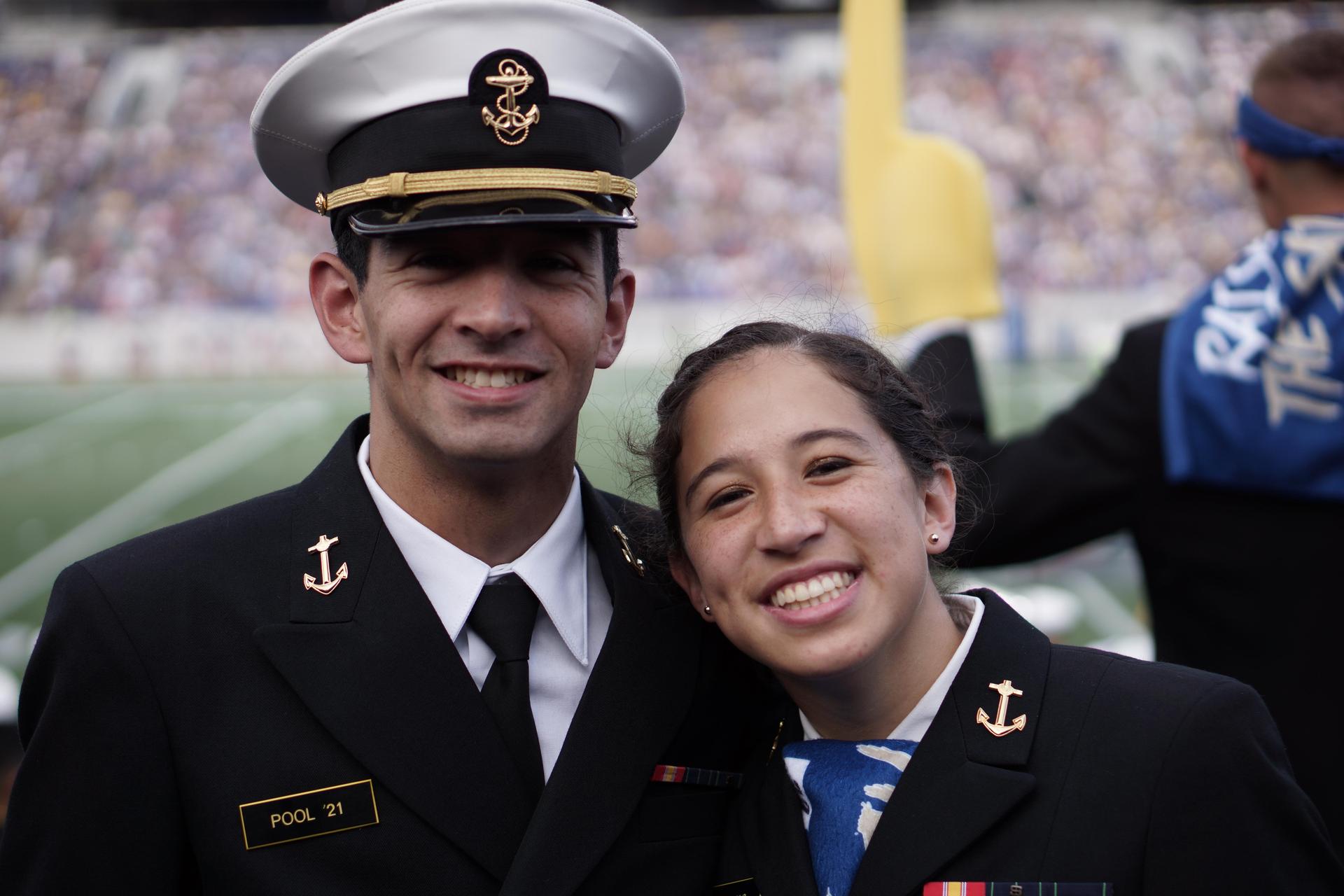 Attending a military academy is rare and prestigious in itself, but even more so when a pair of siblings attend the same one just three years apart.

For Natalie (Pool) Morrison and Andrew Pool, these two siblings share a bond like no other. A bond which signifies family, service and sacrifice. As United States Naval Academy graduates, this Tomball family attributes much of their success to the upbringing and time spent in Tomball ISD schools.

Having grown up in Tomball their entire childhood, both Natalie and Andrew are children to current Tomball ISD Director of Health Services Cathy Pool and her husband, Jock. They attended Willow Creek Elementary, Northpointe Intermediate, Willow Wood Junior High and TMHS. Natalie did spend one year at THS prior to TMHS opening.

As a member of the TMHS Lady Wildcats Soccer Team as well as Band, Natalie considers her very lucky to have experienced her entire childhood in TISD schools.

“The teachers, staff, and coaches, and their compassion for my success played a huge part in where I am today,” she said. “Additionally, several friends I made in TISD I have been friends with for over 10 years now.”

Andrew was just as active in school, participating in football, track, band, student council, NHS, Spanish Club all while serving as Class President.

“My experience attending Tomball schools was great,” he said. “The schools weren’t too small or too big and most of my teachers and coaches took interest in me. I also made a lot of friends over the years.”

When it came time to pursue a future following their high school graduations, Natalie was first up to make the critical decision. Introduced to military academies through her recruitment process with soccer, having participated on the Challenge Soccer ECNL Club team, Natalie was instantly drawn to the USNA in Annapolis, Md.

“Navy was definitely the best fit for me, being right in the heart of one of the best towns in the NE,” she said. “It is truly an incredible experience being in Annapolis and seeing the energy that the Brigade of Midshipmen all have.”

For Natalie, attending USNA to commission as a Naval Officer to serve in the United States Navy was ultimately her goal.

“My goal was to give back to many who have put a lot of work into me, especially the people and the community of Tomball,” she said.

And for Andrew, serving in the military was something he had dreamed about at a young age.

“My family has all served in the military so I knew it was something I wanted to do,” he said. “My sister attending USNA gave me great insight into what life was going to be like at a service academy and I wanted to challenge myself after high school.”

But attending the United States Naval Academy isn’t an easy feat. Not only is it a very selective process to just get in, but those who attend face academic rigor on top of being challenged with military training and standards to prepare them for life after the USNA.

While it was one of the most pivotal times in Natalie’s life, her experience attending USNA was a hard one to recreate.

“They say USNA is a better place to be from than to be at,” she said. “Although that might be true during some super tough times, it really was one of the most special and pivotal times in my life. There is really nothing like it, and the lessons, memories, and relationships are like no other. I am biased, but it is truly something you have to experience for yourself.”

Andrew’s time at USNA really prepared him for life after and provided experiences that he will cherish forever.

“USNA is a challenging place to be at, but a great place to be from,” he said. “I matured a lot in a short amount of time while also learning how to be a leader. I also made lifelong bonds with many people there who I know I can always count on. The experiences USNA gave me were amazing whether it was flying in planes and helicopters, being underway on warships and submarines, backpacking in Alaska or hearing influential leaders speak.”

As graduates of the United States Naval Academy, Natalie and Andrew are currently giving back and serving our great country.

Natalie is an O-3 or Lieutenant. After commissioning as an officer from USNA in May 2018, Natalie went down to Flight School in Pensacola. Once she finished Flight School, she was designated as a Naval Flight Officer in 2020, earning her Wings of Gold.

Now married to her husband, Billy, Natalie is currently deployed on the USS Harry S. Truman, and is a member of the fighter community with an official title of Weapons System Officer, or WSO and she flys F/A-18Fs with the VFA-11, the Red Rippers.

Andrew recently graduated from USNA in May 2021 and was commissioned as an Ensign (O-1). He is currently in NAS Pensacola training to be a Navy Pilot. He will eventually make his way down to Corpus Christi and begin Primary School where he will continue training as a Naval Aviator.

Natalie’s next five years could bring new adventures and new opportunities her way.

Andrew’s life after USNA is just beginning, however he is prepared and ready to fly.

“I will be a winged aviator in the next two to three years,” he said. “Hopefully, I will be flying a cool aircraft doing missions all over the world.”

For many, life in high school can really prepare you for what’s ahead, whether it is what you want to pursue or how you tackle challenges and face obstacles along the way. High School is truly a pivotal time in one’s life and both Natalie and Andrew’s experience at TMHS guided their aspirations and leveraged their ability to face adversity and grow along the way.

“Working hard in class at TMHS, as well as working with others in soccer and band, set the foundation for me that I carry with me as an officer in the Navy,” Natalie said.

“I always felt comfortable asking questions in high school and seeking the teacher’s help when the material challenged me,” Andrew said. “I think that is the biggest thing that helped me be successful. I would also attribute my experience playing football which prepared me very well for the stress and physical demands the military asks of you. The preparation for each game is probably the closest thing to the military you can get in high school.”

Whether a student chooses to attend a military academy, a college, enlist directly into the military or choose the workforce, “Tomball ISD students will lead in creating the future.”

Natalie and Andrew have truly made Tomball proud and while they may be away for some time, serving our country, they never forget where they came from or forget those who appreciate their drive for success and their passion for serving others.

“The constant moves have introduced me to a lot of people and lifelong friends, but there is something special and unique about coming home to friends that knew you growing up and still know you now,” Natalie said.