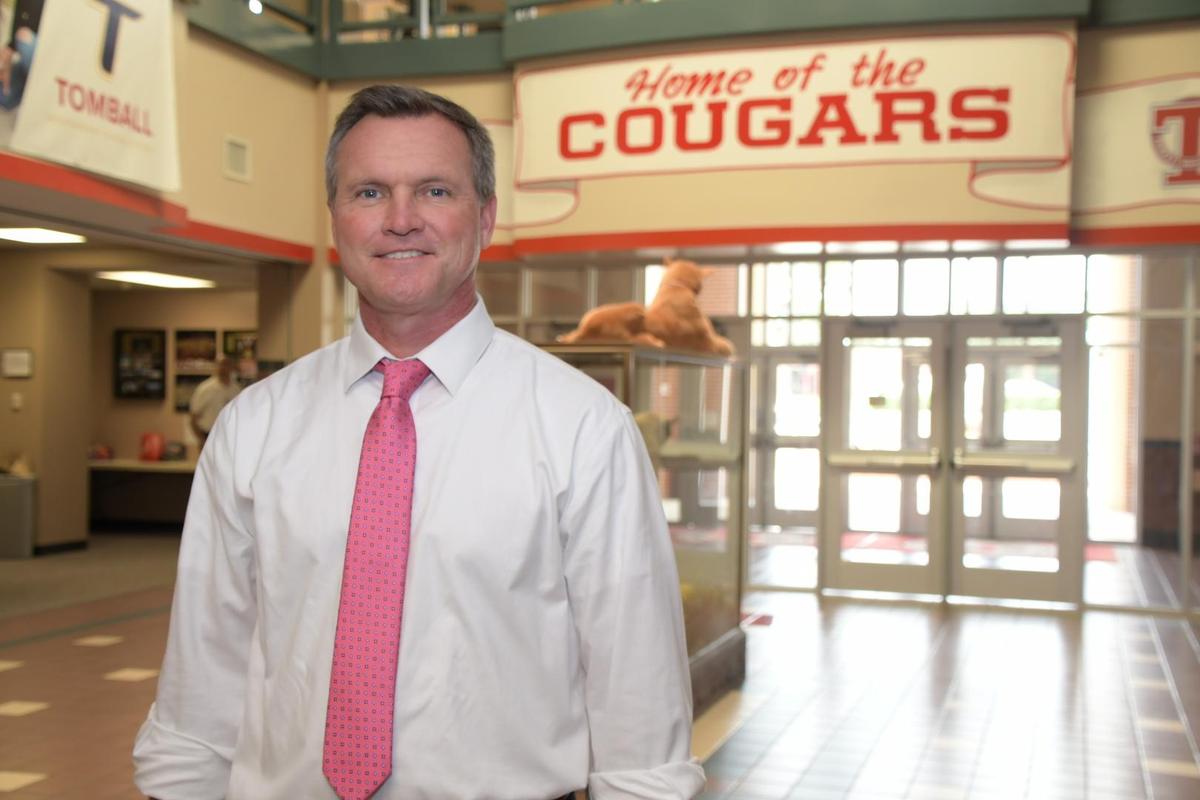 Once a Cougar. Always a Cougar

It wasn’t long before Chris Scott realized that Tomball held a very special place in his heart.

He leads the way as Principal at Tomball High School and everyday walks the halls of where he wrapped up his high school career as a Cougar.

Scott, a 1992 graduate of THS, moved into Tomball ISD when he was a sophomore in high school. As a student-athlete, Scott immediately found his new home. He was a letterman in both baseball and football and to this day, sports his well-earned letterman jacket during Homecoming festivities.

From a Tomball Cougar to a Houston Cougar, Scott continued his love for baseball at the collegiate level, playing for the University of Houston. Along with being a student-athlete, Scott graduated with a degree in biology in 1997.

He spent time abroad after college, specifically in Israel and later obtained his Master of Education at Sam Houston State University.

After experiencing time away from the United States, Scott realized that he could make the most of what he learned by returning to his roots.

His youth experience in Tomball was a memorable one that embodied community involvement and support for those that called this town home.

“Going to Tomball was a little bit similar to where I originally grew up,” Scott remembers. “I grew up in a rural city with a lot of the same similar community beliefs, a lot of togetherness and communal living where people know each other and want to connect. I wanted that for my family as well.”

Well-traveled, Scott knew education was his calling thanks to a few early mentors.

He has been employed by Tomball ISD since 2008 and has been a part of this growing district in a variety of roles ever since.

Prior to returning to Tomball ISD, Scott was a principal in College Station. He then had the opportunity to return as the TISD’s Math & Science Director in Central Office where he spent nearly seven years in that role.

“I really wanted to come back home and invest in the community that gave me so much. My parents still live right behind Tomball High School and for me, our family was growing, and we felt like it was the right time to move back.”

After spending some time away from the campus level, Scott wanted an opportunity to return.

“One thing I missed the most on the campus level was being around the kids. They build a sense of spirit on a campus that is unmatched,” Scott said.

“Opening a brand new school was a fantastic experience,” Scott said. “It was hard in a lot of ways, but it was something I will never forget. The experience of creating something that never existed before in terms of the culture, climate and vision is an opportunity you don’t always get to do.”

Following his stint as principal at CPJH, the opportunity to return to the high school level and to his alma mater opened up and Scott was tasked with the role as principal at Tomball High School in 2017.

He now has the opportunity to see his own kids everyday as students at THS.

“That is a big deal to me,” Scott said. “You don’t always have that luxury of being in the same school as your own kids, so I definitely took advantage of the opportunity when it was presented to me.”

Scott took over at Tomball High School and immediately developed a culture of high expectations, a reputation of being a visionary and a genuine leader and has The Pride of Texas thriving on all levels.

“I take great pride in showcasing our school’s accomplishments, accolades and recognitions,” Scott said. “My goal is to provide our students with an exceptional learning experience that impacts their lives in a positive way forever and instills in them the Cougar PRIDE that remains in me today.”

For Scott, being a Cougar means more than words. It has become who he is and always will be.