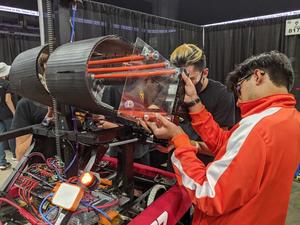 Congratulations to the TMHS Robotics Team for capturing a 4th place finish at the summer Texas Cup, a FIRST Robotics competition.

The team, also known as Vector #8177, joined 70 teams from across Texas to play the challenging game, “Infinite Recharge”, where robots must compete numerous difficult tasks in matches three-on-three. Of the 35 teams in their division, Vector #8177 finished 4th after the qualification matches, became alliance captains and successfully moved through the quarterfinal and semifinal rounds before falling just short of the finals.

“I am so proud of the Tomball Memorial High School robotics team and their coaches,” Jennifer Adams, Director of Science said. “They have accomplished so much in a short period of time as they are a relatively new team. They worked so hard and outperformed teams that have more experience. I am really looking forward to seeing what they do next year.”

This group of innovative young scholars from TMHS benefited from the Young Sheldon STEM Initiative Grant that Tomball ISD was awarded back in 2018-2019 in an effort to strengthen and elevate the robotics programs across the district.