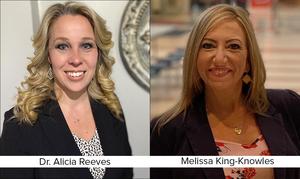 In these roles, both Reeves and King-Knowles will coach and mentor principals and staff to implement the district’s campus based initiatives.

Reeves will serve as the new SSO for Elementary schools.

“Tomball ISD's "Destination Excellence" motto is recognized throughout the Houston area,” said Reeves when asked what drew her to Tomball. “As I began to look ahead in my career path, I was immediately intrigued by the incredible things being done in the district. From Dr. Salazar-Zamora's posts on social media and all of the celebrations being recognized at campuses throughout the district, it was very apparent to me that there was an incredible atmosphere of "family" throughout. As someone who values and cherishes her own family so much, it made it easy to see why employees of the district love working in Tomball ISD, which in turn creates a nurturing and caring learning environment in the schools and fosters a love of learning by students.”

During her career, Dr. Reeves has served as an elementary and intermediate principal as well as a classroom teacher. She joins Tomball ISD directly from Conroe ISD and Deretchin PK-6 School where she has been the Principal since 2010. As a campus leader, Dr. Reeves led that school to an A rating and implemented the PLC process, which was named a PLC Model School in 2019.

Dr. Reeves not only managed her time as a campus administrator but also as part of many district-level committees, including the “Leader of Leaders” committee to create staff development for Principals and assist in development of policies and procedures.

Prior to being named Principal in 2010, Dr. Reeves served as Assistant Principal from 2008-2009. She began her career in education as a teacher at Lamar Elementary School in Conroe ISD from 2003 to 2008.

“I am beyond excited to join the Tomball team and look forward to continuing the standard of excellence set forth in the district.”

King-Knowles will serve as the new SSO for Secondary schools.

“Tomball is a destination district with an incredible reputation,” said King-Knowles when asked what interested her in joining Team Tomball. “It is one of the fastest growing districts in this area which is very exciting. On a personal note, I attended Kinder through second grade in TISD and have fond memories from those years. I want to return to serve in the district that launched my very own love of learning!”

King-Knowles is a veteran in education with 18 years of experience. She has served a variety of roles across several districts and universities in Texas, including principal, college-level supervisor of student teachers, a lecturer and a theatre teacher.

She comes to Tomball ISD, having served in Fort Bend ISD since 2016, most recently as Principal at Dulles High School (2019-21) and at Sartartia Middle School (2016-19). Prior to that, she spent time as an Assistant Principal in three districts across Texas from 2010 to 2016. Before becoming a campus administrator, King-Knowles was a supervisor of student teachers at the University of Texas (2015-16) and Texas State University (2010-13). She also began her career in education as a theatre teacher and pursued that passion from 1999 to 2010 in Round Rock ISD, Bastrop ISD and Pflugerville ISD.

“I have a passion for growing and serving campus leaders,” King-Knowles said. “I find fulfillment in supporting school administrative teams so they can, in turn, best support their staff and students. I aspire to join a team of committed, exceptionally talented district leaders who celebrate the achievements already occurring in our secondary schools while also providing targeted support when needed. I am excited to continue cultivating a positive community of learners who will lead in creating the future!”