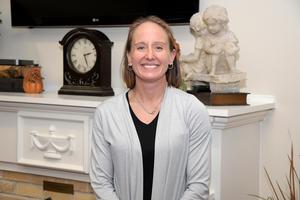 Tomball ISD has named Kim McKinney as the Principal at Grand Lakes Junior High School, which is set to open in August 2021.

McKinney will begin her transition into her new role in January 2021 with the school officially opening for the start of the 2021-2022 school year.

As a veteran in Tomball ISD, McKinney has served the District since 2005 as both a campus administrator and classroom teacher. She most recently opened Tomball Star Academy in 2017 as its first Principal and was named the 2018-2019 Secondary Principal of the Year.

“I had the opportunity to open the Early College and it was so much fun to start a school from the ground up,” she said. “Being able to translate that experience on a larger scale at a comprehensive school is going to be an amazing experience. I truly enjoy creating a culture where every student feels like they belong and love coming to school!”

Tomball Star Academy will graduate its first class in May 2021 and McKinney played an integral role in building TSA into what it is today and is able to reflect on that experience as the campus leader.

“I learned that including all stakeholders in developing the culture, climate and identity of a school is imperative,” she said. “I am truly excited to get to work with my GLJHS Tigers to create the school that every student in TISD will want to attend.”

Prior to taking over TSA, McKinney was an Associate and Assistant Principal as well as an algebra teacher and coach during her time at Tomball High School from 2005 to 2017.

McKinney brings a wealth of experience to the secondary level and understands the importance of building a lasting foundation within a school community.

“The junior high years are hard for so many kids because it is a transition time in their lives,” she said. “They move from being a child to a young adult. I’m excited about creating a safe place for every student to be able to grow and feel good about who they are during this time of their school journey.”

“The school community of Grand Lakes can expect me to be a servant leader who puts kids first, is transparent and wants to see all students succeed!”