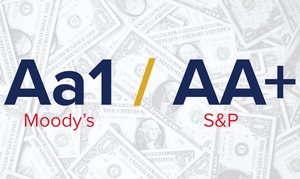 Tomball ISD was among a short list of Texas school districts to earn an AA+ by S&P and an Aa1 rating by Moody's in the rating agencies' recent announcement.

TOMBALL - For its continued focus on financial stability and its robust financial position, Tomball ISD has once again earned high financial ratings of AA+ by S&P and Aa1 by Moody’s, announced by the rating agencies on Tuesday, Sept. 29.

Standard & Poor (S&P) Global Ratings and Moody’s Investor Services provided ratings that are important prior to the sale of bonds on the open market. Both rating agencies use rating rationale for a credit overview that focuses on the local economy, finances of the district driven by property values, average daily attendance, a financial management assessment, and a review of the overall net debt of the district.

S&P affirmed Tomball ISD’s ‘AA+’ underlying rating with an outlook on all ratings of stable. Moody’s affirmed the ‘Aa1’ rating with a stable outlook.

“It is extremely important for Tomball ISD to maintain these high financial ratings because our District is growing rapidly and the need to sell bonds is ongoing,” TISD Chief Financial Officer Jim Ross said. “These high ratings result in interest expense savings which is millions saved over the life of bonds sold.”