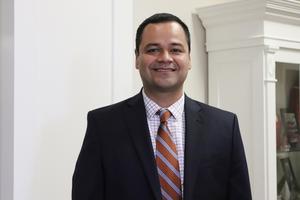 In this role, Guerrero will be working under the Operating Services Department. He will coach campus principals and administrative teams related to discipline management and restorative discipline practices, serve as a District disciplinary hearing officer and manage all campus safety and emergency-related protocols.

“I was thrilled to find out I was selected to join this amazing team and look forward to starting very soon. My boys Diego, Luka, and Abram, and my beautiful wife Sarah (who is also an educator) are excited for this opportunity. I look forward to meeting #TeamTomball on campus and at different events soon,” Guerrero said.

Guerrero joins Tomball ISD from Houston ISD, where he most recently served as Principal at Stephen F. Austin Senior High School since 2015. Prior to that role, he spent 2012 to 2014 as Principal at Ethel R. Coop Elementary and 2010 to 2012 as Assistant Principal at G.C. Scarborough High School both in HISD.

He began his education career in Aldine ISD at C. Dunn Elementary School as a bilingual education teacher from 2006 to 2010.

What made you interested in the position of Director of District Support here in Tomball ISD?
“The opportunity to join a team that is focused on supporting all students was exciting for me.  Everyone has been very welcoming and has mentioned the tremendous Team Tomball atmosphere that I am ready to be a part of.  I have a passion for partnering with leaders to help create a dynamic student experience that empowers every student to graduate from Tomball ISD with opportunities of their choice.”

What will you bring from your experience as a campus leader and educator to this role?
“The first thing I plan on doing is to learn from the amazing team of administrators at the Central Office and I cannot wait to meet the campus leadership teams. I will draw on my experiences as a Principal at Coop Elementary and Austin High School in Houston ISD to ensure there is a safe and welcoming environment for every student and family in our district.”