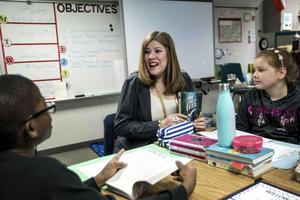 Dr. Salazar-Zamora has been elected to serve on TASA's Executive Committee, the primary decision-making body. This committee is made up of Superintendents from across the State of Texas.

The Executive Committee is TASA’s primary decision-making body and is made up of Superintendents from across the State of Texas. Members are elected by TASA members to represent each of the 20 ESC regions. The state president appoints an additional four at-large members from underrepresented segments of the membership. Four officers are elected by the Executive Committee and work closely with TASA’s executive director and staff to conduct the business of the association.

Dr. Salazar-Zamora has served as Superintendent in Tomball ISD for the last three years and has been a member of TASA for over 25 years. In addition to that role, she continues to represent the district on several other professional organizations, including the Texas Association of Latino Administrators and Superintendents (TALAS) as Past-President, Secretary of the Fast Growth Student Coalition and Texas Council of Women School Executives (TCWSE) to name a few.

Tomball ISD Board of Trustees also recently recommended Dr. Salazar-Zamora to TASB as Superintendent of the Year, which will be announced later this year.

ABOUT TEXAS ASSOCIATION OF SCHOOL ADMINISTRATORS (TASA)
Founded in 1925, TASA is the professional association for Texas school superintendents and other administrators. In addition to advocacy and professional learning, TASA provides networks and services that offer mentorship and inspiration to its members.