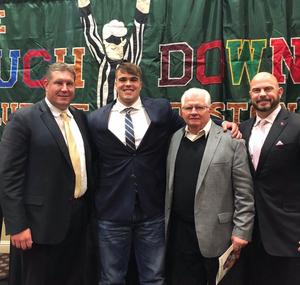 Congratulations to Braedon Nutter for being honored as a TD Club of Houston Scholar-Athlete award winner.

High school football players who are seniors were nominated by their respective head coaches. They were judged on grade-point average, athletic ability and citizenship, as embodied in extra-curricular activities. Judging for the 25 finalists was by the presidents of Texas Southern, Rice, Houston Baptist and the University of Houston.

For being named a finalist, Nutter received a $500 scholarship for college. He is committed to play football at Rice.

The TD Club is the Houston chapter of the National Football Foundation, which runs the College Football Hall of Fame.

Nutter has helped TMHS Football to 10 wins and its first playoff win in program history. The Wildcats are set to continue its run for a State Championship with an Area-Round matchup this Friday, Nov. 22 vs. Spring Westfield at 7 p.m. The game will be played at Sheldon ISD Stadium. Ticket and Directions to Game