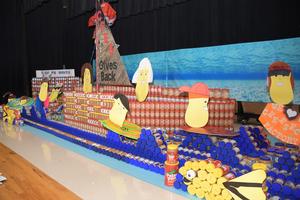 TOMBALL - In an effort to remain committed to its community, Creekside Forest Elementary continued its Caring Hearts Giving by collecting 5,800 pounds of peanut butter, which will be donated to local food banks.

In just two weeks, the school community came together to support those in need. The world-wide peanut butter drive, in conjunction with The Cheesecake Factory, was largely successful a year ago, but the school exceeded their number.

Principal Sherri Trammell led the celebration during the school’s Call to Greatness and then handed the mic over to the parents who spearheaded this entire giving challenge. Five classes were honored for their top contributions, but the entire school community celebrated the success of giving.

“At Creekside Forest Elementary, we are celebrating our giving hearts today. All the people we are able to feed because of your generosity are the true winners,” Trammell said to her students.