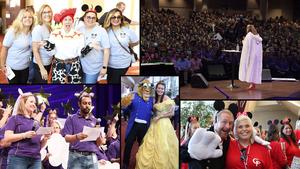 TOMBALL - With the 2019-2020 school year just around the corner, Tomball ISD welcomed back over 2,300 employees at its annual Convocation event.

As the #HappiestDistrictonEarth, Tomball ISD held the annual celebration at Champion Forest Baptist Church and along with sights and sounds from the Disney-themed event, the district was well-represented with enthusiasm during roll call, karaoke and recognitions.

To kick off the event, Tomball ISD employees dressed as Disney characters greeted the smiling faces of teachers and staff to the back-to-school event as they arrived campus-by-campus.

The program began with Tomball ISD Superintendent of Schools Dr. Martha Salazar-Zamora celebrating the success stories from the 2018-2019 school year. From opening a Two-Way Dual Language Academy and Early Excellence Academy to breaking ground on construction projects and to maintaining exemplary scores, Tomball ISD had an eventful and memorable year. Dr. Salazar-Zamora also took the time to recognize the Tomball Education Foundation who donated over $86,000 in teacher grants last year as its first full year as a Foundation.

Decked out in spirit gear, the annual tradition of roll call followed as 20 campuses and several district administrative departments showcased their talents all for a chance to win the coveted Spirit Stick award.

Coming away with the Spirit Stick following their performances were Willow Creek Elementary, Tomball Star Academy and Transportation.

As excitement filled the room, Director of Fine Arts JD Janda, who was Aladdin for the day, took over to MC campus karaoke and improv competitions on stage with TISD Digital Learning Coach George Williams on the piano as Mickey Mouse.

The 2018-2019 Principals of the Year Kim McKinney (TSA) and Chad Schmidt (TES) along with Teachers of the Year Stephanie Scott (CES) and Janet Stackhouse (TMHS) and Paraprofessionals of the Year Karen Smith (TCES) and Deb Rigg (TCA) were honored.

And wrapping up the event was Toro from the Houston Texans joined by community partner Andrew Meese, Vice President of First Community Credit Union of Tomball, to award Texans tickets to several lucky employees.